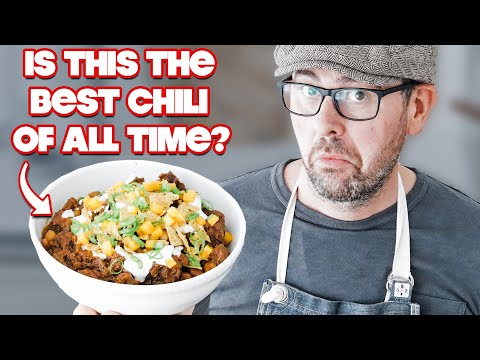 Chili, or chili con carne, is a centuries-old recipe consisting of ground or chopped beef with chilis or chili powder. While the first recipes started to show up in San Antonio, Texas, in the early 18th century, it is said to have been created by the Aztecs in the 16 century. There are also many other stories and tales of how this came to be.

In Texas, it’s often called a “bowl of red” and considered a crime if beans are added. However, beans have become a precondition to chili across America in other states. This classic dish has also been redone throughout the United States as there are several different versions like Cincinnati Chili, White Chicken Chili, or even this brisket chili recipe, among many others.

Chili is always good because it’s hearty, can feed a big group of people, and can be altered and customized to fit your flavor profiles. In addition, it’s also delicious on hotdogs and Smash Burgers.

PRINT OFF THIS RECIPE AT: https://www.billyparisi.com/the-ultimate-homemade-chili-recipe/

Ingredients for this recipe: