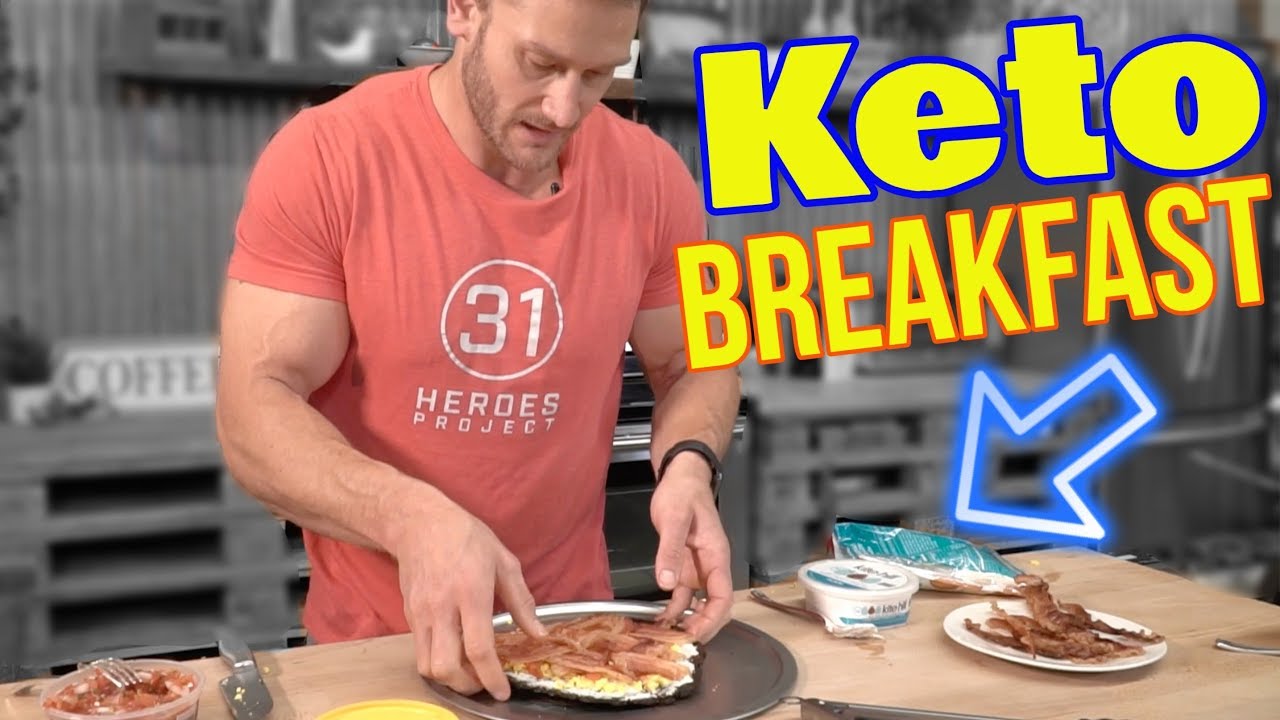 Keto Breakfast Recipe | Bacon Pizza | Keto Pizza- Thomas DeLauer
Ingredients:
-2 whole eggs
– 1 extra yolk
Note: May not use all the egg on the pizza
– Chop up eggs as finely as possible so no giant clumps
– Add a half tea spoon of salt:
Don’t add salt till the end or you’ll denature the eggs
– Add 3-4 tablespoons of vegan cream cheese and spread on crust
– Add a quarter cup of vegan cheese and mix in alongside the cream
cheese, making a layer at the bottom
– Add pico to your liking
– Weave bacon over pizza
Optional: Bison Tallow to cook with (~1 tablespoon in pan)

Breakfast. The same old, same old, same old all the time especially on keto. We got bacon. We got eggs. We got the usual stuff. Why can’t we just have a little bit more fun with it? Get a little bit more creative. You always see me in a scientific light, right? I’m always doing these videos breaking down science. Well, today, I want to take it into the kitchen in a little bit more of a fun way. I’m going to show you a really, really simple keto breakfast that you can make. It’s going to blow your mind. We’re talking keto breakfast pizza, but there’s a specific order of operations you’ve got to follow in order to make this thing work. You can make it into a panini or you can leave it as a pizza.

The first thing that I’ve got is I’ve got three organic cage-free eggs. Very important that you go for high quality omega-3 eggs. Spend the extra couple bucks. I promise you, it’s going to be worth it. You’re going to notice what I’m doing is I’m using two full eggs, but then I’m using just the yolk of the third egg. What I’m trying to do is get a better fat to protein ratio. Believe it or not, and I’ve talked about in other videos, the whites are actually a pretty inflammatory part of the egg. You see, that’s the part that has a lot of the things that can cause a bit of chaos in your body. That essentially is the placenta. The placenta carries a lot of the nutrients in a lot of the things that the chicken ate.

The yolk is just the fat and pretty much protein. Let’s get more of the yolk. Go ahead and scramble this up. Now when we scramble it up, we want to make sure that we’re scrambling it as finely as we possibly can. We’re not trying to leave big chunks because eventually we’re going to lay this over the pizza. We want to make sure that we’re kind of chopping it up as we scramble it. Now what I’ve used to cook the eggs in is actually bison tallow. You don’t have to use this. You can use coconut oil. You can use butter if you really want to. I prefer tallow because it makes it… It gets a well-rounded flavor, but also talk about a good quality fat.

Once I pop that in the oven, I’m going to let that sit in the oven for about, I don’t know, 15 minutes. We’ll get to that in a second. But in the meantime, I’m going to go ahead and put some bacon in a pan. You can use turkey bacon. You can use regular bacon. You can use thinner slices of pork belly if you really wanted to make it think, but I recommend trying to go as thin as possible because you’re going to need it so the pizza doesn’t end up too heavy later on. You want to cook it enough so that it’s, of course, cooked, but then you want it to still be flexible because eventually what we’re going to do is we’re going to weave it onto the pizza. Let it still be flexible.

Go ahead and weave those suckers on. I mean you have… Your end result is a nice breakfast pizza right then and there. You could go ahead and add some sour cream to it if you wanted to, but one of the things that I like to do is actually cut it in half and then fold it over. Usually if you’ve actually cooked the crust hard enough, you’re going to be able to fold it over without a problem. Fold it over and once it’s cut and then you actually have more of a panini. It’s more of a breakfast sandwich. You eat it as a pizza or eat it as a panini sandwich style thing. Honestly, that’s kind of the benefit of using these Califlour crust especially the plant-based ones because they’re sturdy.

Again, big thanks again to Califlour Foods and make sure you check them out down in the description. See you all in the next video.